Canada is located on the North American continent. It is the second largest country in the world with an area of 9,984,670 km², which makes it fall into 6 different time zones. The country is characterized by its vast uninhabited natural areas, which occupy almost 70% of its surface. The biggest attractions include Banff National Park in the Rocky Mountains and Niagara Falls on the border with the USA.

Canadian culture is deeply influenced by early European immigrants, most of them from Great Britain, France and Ireland. In recent decades, there have also been large influxes of immigrants from Asia, the Caribbean and Africa who brought their traditions with them, traditions that were incorporated into the larger Canadian one. For example, the Chinese New Year is celebrated in Vancouer and the Caribana parade is celebrated in Toronto.

The largest cities in Canada, besides the capital, are Ottawa, Toronto, Vancouver, Montréal and Quebec. There are also eighteen UNESCO World Heritage sites worth seeing. 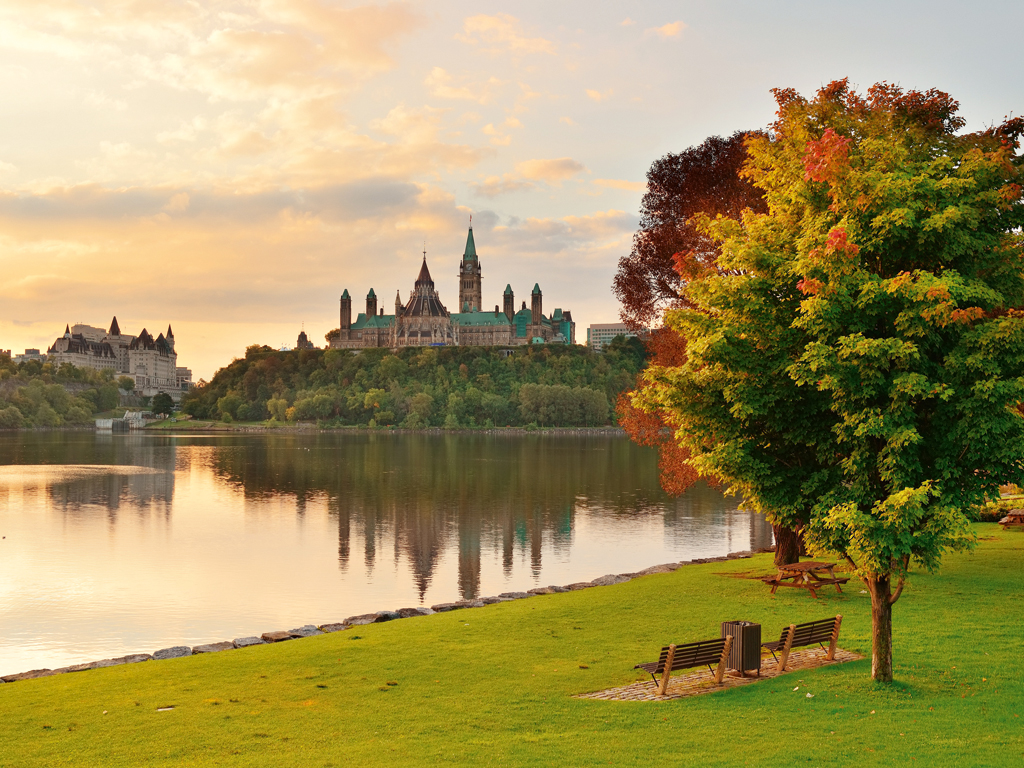 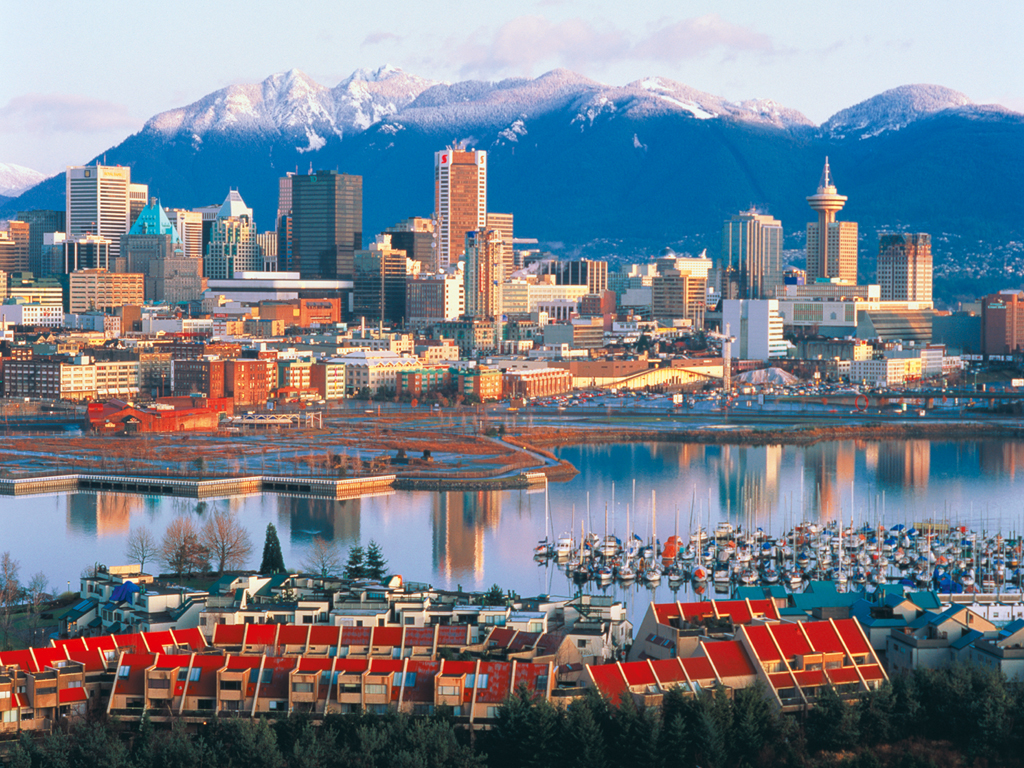 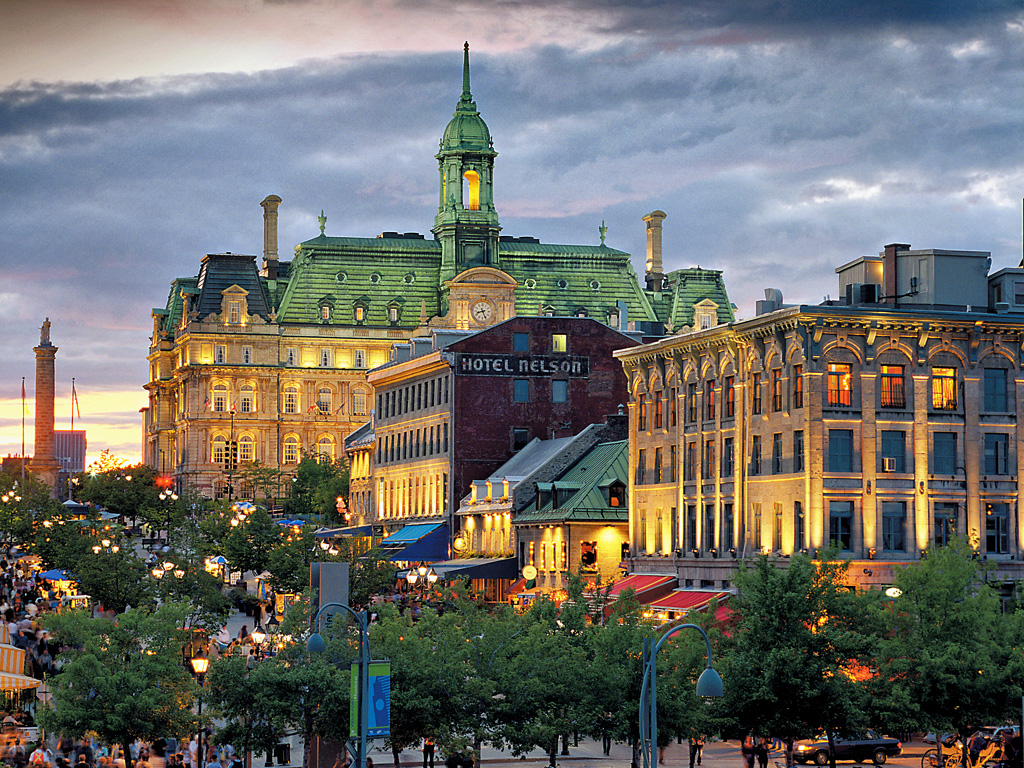 Canada is the second largest country on Earth and has an area of 9,984,670 km². The country extends on the North American continent between the Atlantic Ocean in the east, the Pacific Ocean in the west and northward to the Arctic Ocean. It borders the USA in the south and northwest.

Canada has 6 different time zones. Depending on where you are, the time difference can be from 4 ½ up to 9 hours. The time difference to Ottawa, Toronto and Montréal is 6 hours, to Calgary 8 hours and to Vancouver and Victoria even 9 hours.

Canada has many different climate zones as well, because it stretches across such large masses of land. There are areas with polar climate conditions, maritime climate, continental climate and moderately cold climate, which means that there are varying amounts of precipitation and average temperatures.

The best time to travel to Canada is difficult to define because of the different climates. In the Northern parts of Canada temperatures can go all the way down to -40 degrees Celsius in the winter. In summer, on the other hand, temperatures of up to 30 degrees can be expected. The Okanagan Wine Valley is one of the warmest regions in all of Canada, located in the state of British Columbia

All non-visa applicants must apply for an online-based travel authorization, the "eTA" (Electronic Travel Authorization), prior to departure. We recommend completing the application up to 72 hours prior to departure. In case of later applications, timely processing of the application by the Canadian authorities cannot be guaranteed. The cost is 7 CAD per person. The "eTA" is valid for 5 years.
The application requires a valid passport, an e-mail address and a credit card (Mastercard, Visa, American Express) to pay the fee. The online form is currently only available in English or French.

Canada has a very good health care system and offers sufficient medical facilities and trained specialists.
Hospital fees for foreign visitors are either calculated according to daily rates or according to the specific illness and the duration of the hospital stay, but can usually be very high. Before you travel, you should therefore make sure that your health insurance policy also covers non-European countries or take out appropriate travel health insurance.

TIP: Pay by credit card, take the bill with you and submit it to the insurance company later at home. Saves both you and the hospital staff a lot of time and stress!

West Nile fever season begins in June. This flu-like viral illness is transmitted by mosquitoes. Since severe complications can occur with the disease, special protection against mosquitoes is recommended during this time. Otherwise, standard vaccinations are sufficient for a trip to Canada. The meningitis vaccination is one of the standard ones in Canada and is one recommended ones to do before travelling.

We have compiled a packing checklist so that you can be perfectly prepared for your journey!

Society and every day life

Canada is a country without an official national religion. Three quarters of the population are Christian, the rest are Muslim, Jewish, Hindu, Buddhist. Up to 16% do not belong to any denomination.

Officially, Canada is a constitutional monarchy part of the Commonwealth of Nations with Queen Elizabeth II as head of state. However, Canada is also a representative parliamentary democracy organized as a large federal state. The constitution is composed of written legal sources and unwritten common law.

Canadians are known to be very friendly and polite. One should use the words "please" and "thank you" as often as possible. As a greeting, one is often addressed with "Hi, how are you?". You don't have to answer honestly, a casual "I'm fine, thanks. And you?" is quite sufficient.

In the east of the country, the main traffic route runs along the Saint Lawrence River through Ontario and Quebec, connecting the major cities of Toronto, Montreal, Quebec and Ottawa. The entire north is hardly accessible because it is not needed. In the west, the major cities near the American border are connected by transportation systems. The Canadian government wanted to connect the widely separated provinces, and this was done with the help of three transcontinental railroads and several spur railroads. For longer distances, there are domestic flights offered by 75 different airlines.

Native Americans were the first inhabitants of Canada around 12000 BC. After them, the Inuit came into the land around 5000 BC. Vikings were the first Europeans to live on this land, also known as Newfoundland, in 1000 BC. The Frenchman Jacques Cartier first claimed ownership over regions of Canada in 1534. These regions then became French land. The city Québec was founded by Samuel de Champlain in the 16th Century. Many French people then began to migrate to Canada and create settlements in the years to come. British settlers also came to the land in 1670.

After a few peaceful centuries, the Seven Years War between the English and the French began. In 1763 France gave their ownership rights to Great Britain with the Treaty of Paris. After the U.S. War of Independence (1775-1783), Canada experienced the first wave of immigration of British Loyalists. From 1812 to 1814 followed the British-American War, which ended inconclusively and was concluded with the Peace of Ghent.

In 1867, Canadian Confederation occurred and Canada was declared a federal state by Great Britain, which now had autonomy from Great Britain. By 1912, all provinces (except Newfoundland in 1949) had joined Confederation. Canada voluntarily became a member of the Commonwealth in 1931.After World War II, Canada experienced a large wave of immigration from Europe, India, the Far East, and the Caribbean, which resulted in a significant economic boom. Land treaties were signed with the aborigines, who got back parts of land in the north. There were also tensions between English-speaking Canada and the French province of Quebec, which demanded more independence. However, this was rejected by a narrow majority.

Winterlude: (January to February) This is a yearly festival that is always celebrated in the winter. It attracts about 600000 visitors every year. This festival is also free of charge.

Canadian Music Week: (March) One of the largest and most influential music festivals and conferences within Canada takes place in Toronto for 10 days. More than 1000 live bands perform on stages in Downtown Toronto, regardless of whether this stage happens to be in a pub, in a bar, in a cafe or even inside clothing stores. Beside the Music Festival, conferences also take place in which the music industry is discussed. There will also be Award Shows in which the best musicians will be announced and awarded prizes.

Tim Hortons Ottawa Dragon Boat Festival: (June) This is the largest Dragon Boat Festival in North America with over 200 teams, 5000 paddlers and 75000 audience members and viewers. Concerts and cultural performances also occur during this festival. The best thing about all of them is that they are completely free of cost.

Fireworks Festival:(June) You can get the best view on the international Fireworks Festival from the Parc Jean-Drapeau in Montréal. The park itself has plenty of entertainment to offer on its own as well though. Some of the events found there are the music, dance and theatre shows, the sports events and the free time activities that people can participate in. With so much going on you will never have a boring moment.

Beaches International Jazz Festival: (July) The Beaches Jazz Festival presents a multitude of different concerts and events, such as the 'Streetfest' or the 'Sounds of Riverside'. Salsa, Swing, Afro-Cuban, Fusion, Soul and many more music styles are also playing during this festival. You may find it hard to resist the temptation to dance along!

Just for Laughs Festival: (July) Do you feel like laughing really hard? If so, coming to Montréal to visit the world's largest comedy festival since 1983 is a very good idea! The event's Motto is "Make People Happy". A selection of the most famous comedians and new comers perform at this event with said motto in mind and at heart.

International Chalk Art Festival: (September) The largest street art festival in Canada showcases the cultural diversity of Downtown Victoria at the port of Victoria. You can admire chalk artworks (even in 3D!) made by professional artists for free. You will also be able to enjoy live music outdoors whilst viewing the artists' work.

Eastside Culture Crawl: (November) 25000 visitors come to the Cultural Crawl every year, to see designs and crafts made by over 480 artists and crafts people. The goal of this festival is to promote and support the artists, whilst also creating further public awareness of these arts by hosting various workshops and seminars about them. This Festival is also completely free of charge! 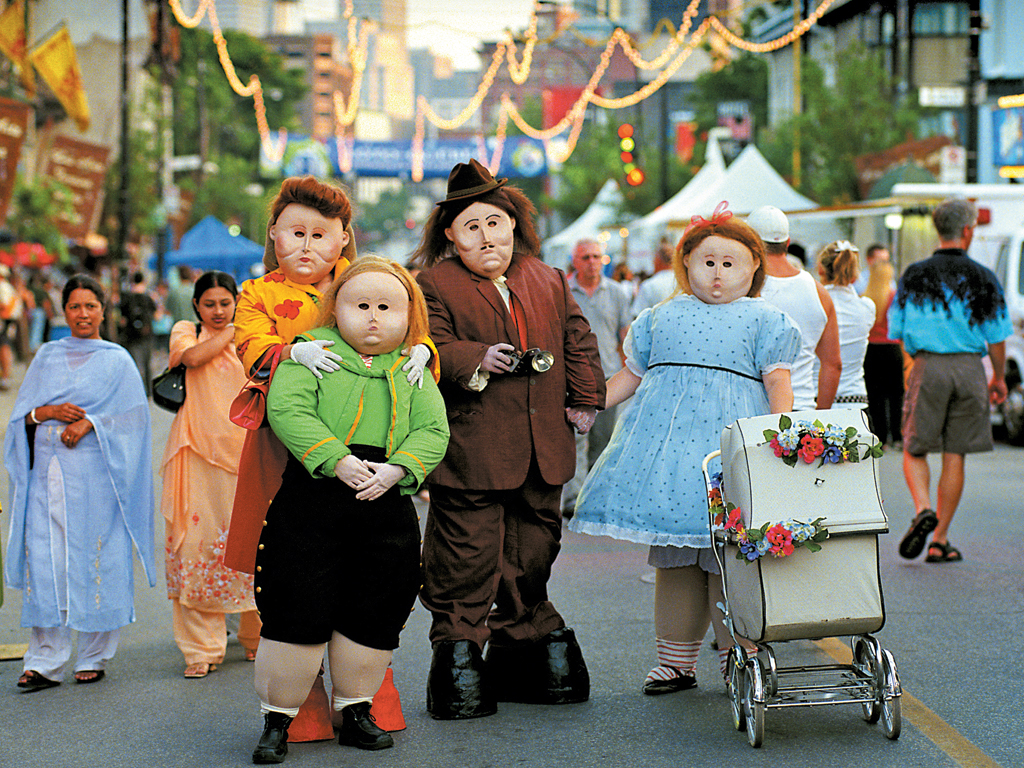 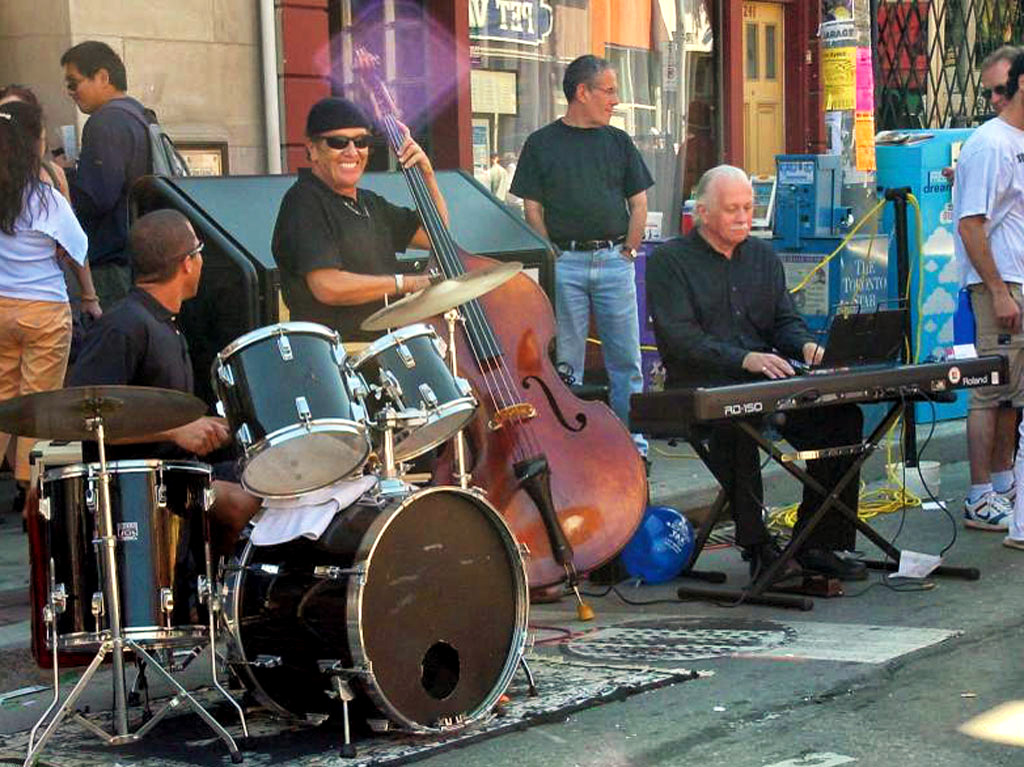 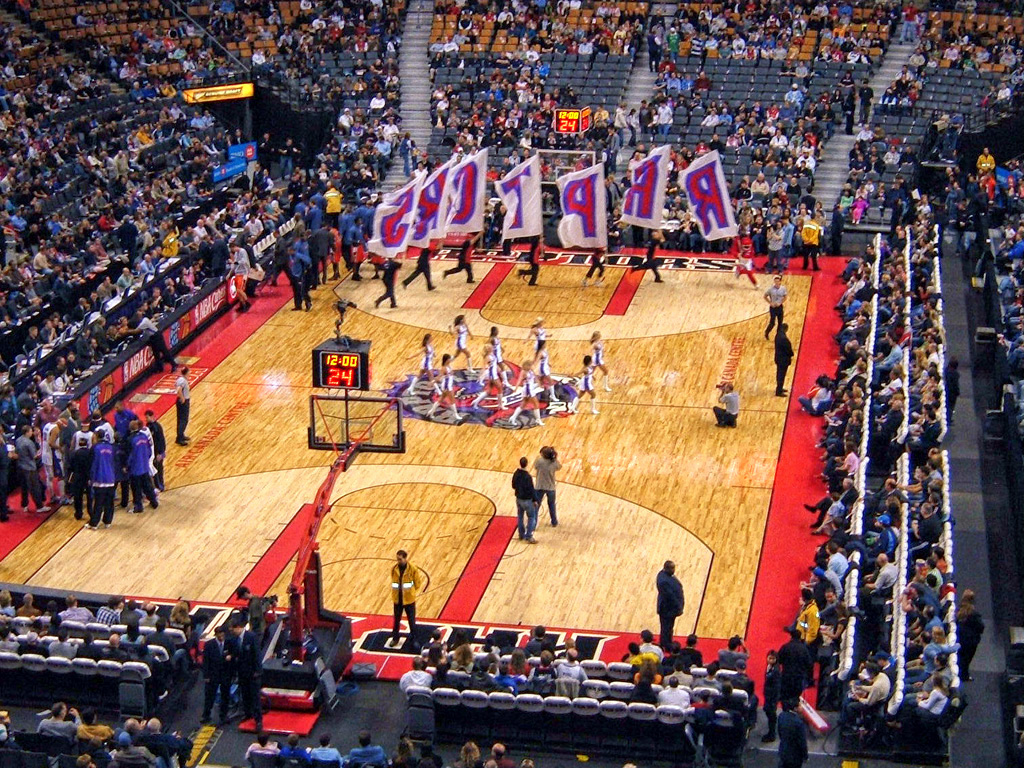 A wide range of culinary delights awaits you in Canada! The Atlantic coast is known for its lobster and lobster-like crustaceans, while the west coast used to specialise in wild salmon fishing, now replaced by salmon farming.

Cultural differences also deeply influence Canadian cuisine. In Québec, the French influence cannot be overlooked. In the prairie provinces, on the other hand, the influence of the midwestern United States is strongly noticeable, with the British culinary traditions mainly influencing the far west.

There are also wine-growing regions in Canada, for example on the Niagara Peninsula and in the Okanagan region, as well as in the southeast of Vancouver Island in British Columbia. Viticulture has a tradition dating back more than 200 years. In 1974, new viticultural licenses were issued and wine associations focused on higher quality, resulting in an increased popularity. Canadian wines contribute to about half of the country's total consumption.

If you plan to camp in Canada, you should note that wild camping is prohibited in the national parks and is also not so welcome in more densely populated areas. You should also beware of wild bears. All food should be stored in odor-proof bags in the car or hung from a tree at least 4 meters high.

In Canada there is a sales tax of 5%, plus regional taxes of up to 8%. All products are priced without taxes, which are added at the time of sale. This also applies to menus in restaurants!

The purchase and consumption of alcohol is allowed for people over 19 (exception: 18 years in Alberta, Manitoba, Quebec). Drinking alcohol in public is strictly prohibited. Alcohol may only be consumed within licensed premises or at home.

If you are familiar with the tipping rules in the USA, then you will know that tips are not included in payments that you make. You should give a tip of around 15 percent of the original payment price that you had to pay.

Common prices for a coffee is about 1.50 to 2 Euros and a beer can be bought for about 3 to 5 Euros. By knowing this you can avoid getting ripped off by places that offer these beverages for more than the prices stated above.