“Hey, I’ve been there!” is something all of us have said or at least thought while watching a film. But sometimes films are shot in completely different places than we might expect. The Sprachcaffe team have gathered some interesting information about films that were shot near our Sprachcaffe language schools.

Golden Bay is one of Malta’s longest sandy beaches. This heavenly bay provides the perfect movie set. This was obvious to director Wolfgang Petersen, who filmed a few scenes for the blockbuster Troy there. Of course, the actual remnants of the city of Troy are in Turkey and are now a UNESCO World Heritage Site, which is why shooting the film mainly took place in Malta and Mexico. The scene with the ship at the beginning of the film was shot in Malta, as were the scenes showing the inside of Troy. The beach at Mellieħa Bay and the small town of Mellieħa were also filming locations. Part of the beach at Mellieħa Bay can be seen when Odysseus (Sean Bean) appeals to the hero Achilles (Brad Pitt) for support in battle against the Trojans.

Gladiator and much more

Gladiator, released in 2000, was not only shot in Rome, as some may expect. Large parts of ancient Rome were shot at Fort Ricasoli in Malta. The producers even had a replica of the Roman Colosseum built in Malta, about a third of the size of the original structure.

I could go on listing films that were shot in Malta, the most recent of which is probably the Assassin’s Creed film, released in 2016. However, the list would be too long. If you want to discover more you can join a Malta Film Tour and find out which districts have served as movie sets.

Lastly, we would be foolish to ignore the fact that it is not only films that are seduced by Malta’s allure. Daenerys Targaryen and Khal Drogos’ wedding scene in the beloved Game of Thrones series was filmed on the Maltese island of Gozo in front of the famous Azure Window. The renowned natural arch sadly broke apart during a storm in March 2017. More filming locations for the fantasy series can be found in Malta though, such as Verdala Palace, residence of the merchant Illyrio in the series, who establishes the alliance between the Targaryen brother and sister and the Dothraki in the first season. 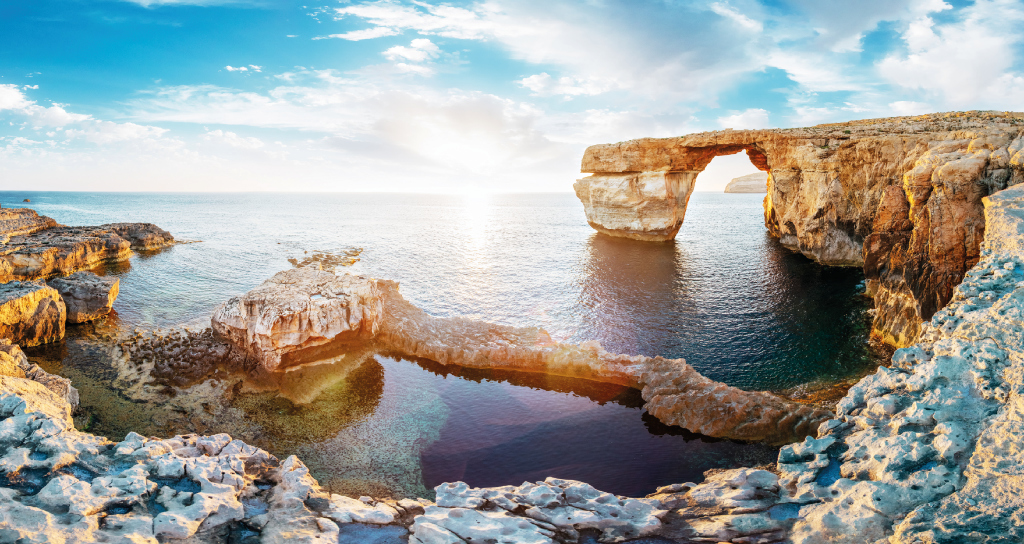 After detective Starling in the film Hannibal receives a handwritten note from Hannibal Lecter, which emits a strange fragrance, she discovers from a perfume expert that the ingredients for the skin cream from which the smell comes can only be bought from a few shops in the world, and eventually travels to Florence. We see the setting of Florence in the 2001 film as Dr. Lecter (Anthony Hopkins) walks across Ponte Vecchio. Since Lecter is also portrayed as a music and art lover despite his feral urges, even the Uffizi Gallery features in the film. 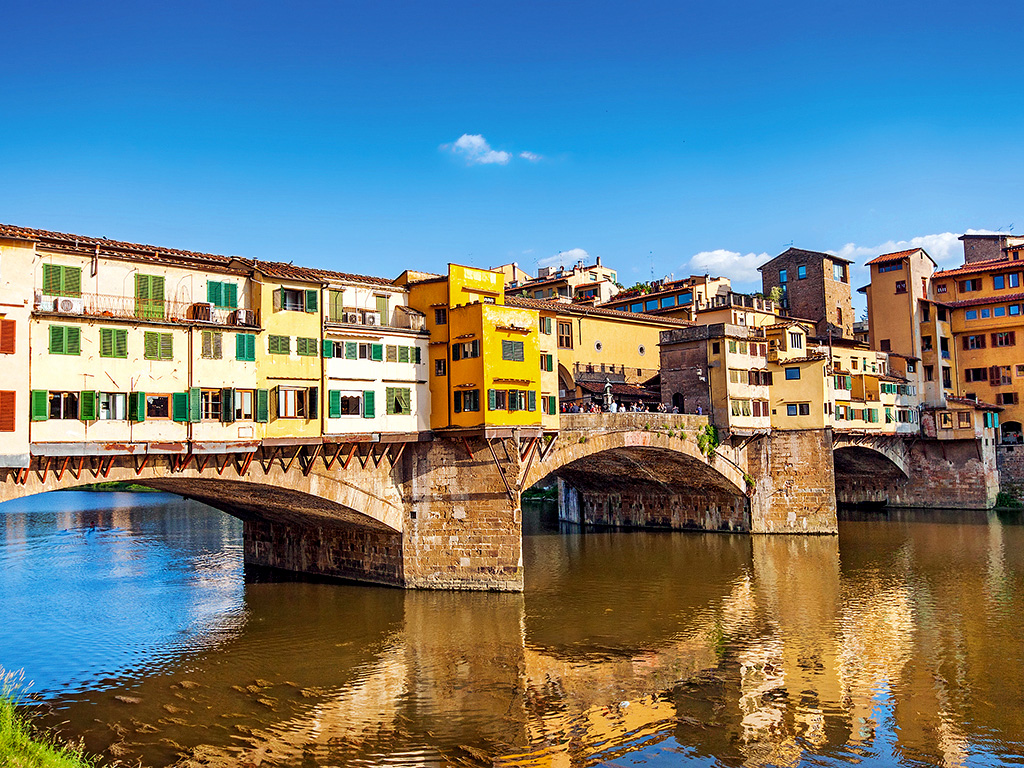 The film adaptation of Dan Brown’s novel, Inferno, was also produced in close cooperation with the city of Florence, through which Robert Langdon scurries to prevent the outbreak of an epidemic. As the symbologist gets his clues from works of art, the film also gives you a taste of the magnificent art that awaits you in Florence.

Most German films are shot in Berlin, however Frankfurt has also become a popular filming location in recent years. The most well-known German film with a Hessian backdrop is probably Matthias Schweighöfer’s What a Man, released in 2011. The story follows 30-year-old Frankfurt elementary school teacher Alex Nowak as he tries, after a failed relationship, to discover what makes a man a man. The scene at the beginning of the film, as Schweighöfer cycles through Frankfurt, is particularly memorable. He can be seen whizzing through recognizable parts of the city, including cycling over the Eisernen Steg, a bridge offering a fantastic view of the Frankfurt skyline. Palmengarten, Opernplatz in front of the Alte Oper (old opera house), Frankfurt Eissporthalle, Schillerschule in Sachsenhausen and the then King-Kamehameha-Suite (now the Kameha Suite) in the banking district also serve as settings in the film. Quite appropriately for the images on screen, singer Philipp Poisel recorded the ballad Eiserner Steg for the film. Other films shot in the Hessian metropolis include German comedies Schlussmacher and Männerhort.

Harry Potter and the Philosopher's Stone

Any self-respecting Harry Potter fan knows that several scenes throughout the film series are set in Britain’s capital city. The most memorable London location of all may well be platform 9¾ in King’s Cross Station. While there are only train tracks between platforms 9 and 10, fans can find the sign to platform 9¾ on the wall at the back of the main concourse, where the back half of a trolley protrudes from the wall. Another well-known scene from the Philosopher’s Stone is Harry’s first ever encounter with a snake, a Burmese python, which takes place in London Zoo. There is now a plaque next to the snake enclosure commemorating the event.

There are, however, less famous locations from the first Harry Potter film to be found in the ancient heart of London. The curved entrance to the Leaky Cauldron can be found at 42 Bull’s Head Passage, although you’ll be disappointed if you enter expecting a pint of exploding lemonade – it’s only an optician’s. Just around the corner is the splendid Leadenhall Market, where Diagon Alley was filmed. The charming building was built in the Victorian era.

Directed in 1971, Stanley Kubrick’s A Clockwork Orange was one of the most controversial films of the 20th century, resulting in it being withdrawn from circulation until 2000. Now considered one of the best films ever produced, it is set in a dystopian London, with many of the film’s bleak and cold locations reflecting this. All scenes were shot in or near London.

One memorable scene, in which the main character, Alex (Malcolm McDowell), visits a record shop, was filmed in the Chelsea Drugstore. An extremely modern shopping center at the time, the Chelsea Drugstore was also mentioned in The Rolling Stones’ song, You Can’t Always Get What You Want. Unfortunately, the building is now host to an unremarkable McDonald’s (or MaccyD’s as the locals call it).

Unlike the colorful record shop, most of the film is set against a cold, grey backdrop. It wasn’t hard for Kubrick to find ideal locations with all the Brutalist architecture being built at the time. For ‘Municipal Flatblock 18a’ in which Alex lives, Kubrick chose to film at the then new Thamesmead Estate, a vast development near Woolwich in South East London.

One of the most unforgettable scenes involves Alex and his gang of “droogs” attacking an innocent homeless man they find drunk in a dingy pedestrian underpass. This was filmed in the labyrinth of underpasses beneath York Road Roundabout at the southern end of Wandsworth Bridge.

The tramp gets revenge later on though, in a scene filmed by Albert Bridge, one of London’s grandest bridges and certainly one of the film’s most traditional locations.

Considered by many to be the best film set in New York, Taxi Driver perfectly captured the murky underworld of New York in the 1970s. Robert De Niro plays main character, Travis Bickle, a young Vietnam veteran working the night shift in his yellow cab. Bickle’s lack of human interaction and sleep, and his observance of the seedy reality of night-time New York, combine until his disgust drives him to do something about the crime and corruption around him.

Much of the movie shows Bickle navigating his way through the Greenwich Village and Hell’s Kitchen neighborhoods of New York, although director Martin Scorsese mostly avoided widely recognizable locations. One discernible location, however, is Columbus Circle, where Bickle nearly goes through with his plan to shoot a politician. The ugliest scenes, including when Bickle shoots a pimp (Harvey Keitel) in a doorway, were shot on East 13th Street, now a much cleaner district than in the 70s. Aside from specific locations, the constant flicker of neon lights masterfully visualizes the insomnia of the city that never sleeps.

Amélie (2001) is one of the most adored films set in the French capital. Most of the famous Parisian landmarks can be spotted at least once in the film, along with countless other lesser known quaint locales.

The revered Notre Dame Cathedral features early on in the film, when Amélie’s (Audrey Tautou) mother is killed by a tourist falling from its tower.

However, most of the film is set in the inner-city district of Montmartre, which resembles a picturesque French village despite its proximity to the city center. The opening scene of the film shows a bluebottle fly buzzing through the quaint, cobbled rue Saint Vincent and rue des Saules, just behind the beautiful Sacré-Cœur Basilica, which is situated at the top of Montmartre, the hill from which the surrounding district gets its name. It is on the steps leading up to the Sacré-Cœur that Amélie later lays down a path of blue arrows to discover who the man is who has been leaving his photo all over the ticket hall in Gare de l’Est. The entrance to Amélie’s apartment is at 55 rue des Trois Freres and the grocery store where she shops is Au Marche de la Butte on the same road. Nearby is the scenic Metro station, Lamarck-Coulaincourt, where Amélie describes the delectable food being sold at the rue Lamarck market to a blind man. The location most Amélie fans want to see is undoubtedly the delightful art deco café where she works, Café des Deux Moulins, which is actually a real café and can be found at 15 rue Lepic. Their crème brulée is even named after the film.

Away from the village-like Montmartre, Amélie looks for ‘Bretodeau’ in a phone booth where rue Mouffetard meets rue Clovis in the Latin Quarter. And it’s while crossing the wooden Pont des Arts by the magnificent Louvre that Amélie is overcome with a feeling of love and an urge to help mankind.

If you've now caught travel fever, then check out our language schools in the above cities and immediately set off on a tour of filming locations. Maybe you'll discover more that we overlooked.

For many years it seemed as though the time in Cuba stood still. But now modern advances have found their way into this...

Italy is known for its beautiful holiday destinations. However, there are so many different regions that it can be...

J.K. Rowling’s bestselling book series Harry Potter has captured the hearts of millions of through its big screen...

While people in Germany’s carnival strongholds of Cologne and Mainz argue about whether they’re supposed to shout...

Auf zum Oktoberfest! Even though 7 million litres of beer are consumed every year during this well-known German...

Living abroad does not only require learning a new language, but also adapting to a foreign culture. Each culture have...

Planning your perfect holiday getaway? Are you looking for travel ideas? Maybe you need to do travel research? How do...